Originally posted on Medbridge as part of their blog series

Tissue loading is one of the key variables that we can manipulate in rehabilitation. From the more passive loading (i.e. manual therapy) through the most active approaches (i.e. max effort lifts, plyometrics), the management of load represents a key component of what the physiotherapist or athletic trainer does.1-3 Once the clinician establishes the need for some form of physiological adaptation, the primary clinical question becomes one of dosage. The clinician can determine appropriate dosage by methodically applying clinical reasoning over time to the presentation of the individual. There are a few models that deal with the conceptual aspects of determining appropriate dosage. Two that are very relevant to clinical practice are the tissue homeostasis model and the idea of optimal load.4-6 Both look at the process in a similar manner and to some extent can be used together to drive the clinician’s reasoning. Applied appropriately, these models give the clinician a powerful framework to guide the rehabilitation process.

Dr. Dye extensively described the tissue homeostasis model in relation to patellofemoral pain, but it can be extrapolated to other areas.4,7,8 In brief, this model proposes that many clinical issues can be related to a disruption of the local tissue’s homeostasis due to exposure to stress beyond its adaptive ability. The local tissue is viewed as a system designed to create, accept, transfer, and dissipate biomechanical loads. The upper and lower limits of the tissue’s tolerance to load define its envelope of function. The right side of the envelope represents a dosage significant enough to stimulate adaptation but still within the tissue’s ability to recover. Loads above this threshold will cause tissue degradation at a higher rate than to which it can adapt; loads below will result in a detraining effect.

This constant back and forth between anabolism and catabolism has been termed the yin and yang of tissue homeostasis.9 In classic stress terminology, the envelope covers the general adaptation syndrome processes (homeostasis, alarm, and resistance), whereas the area to the right of the envelope represents the exhaustion phase.

Healthy individuals have a fairly wide envelope between the minimal effective dose and the maximum tolerated dose. A law of diminishing returns is also in play here: doing twice the total sets of an exercise doesn’t double the adaptations elicited. With injury, this zone narrows and it requires more precise dosage to stay within the envelope of function. The rehabilitation goal is to increase this envelope by driving its upper limits to the right. The image below gives a visual representation of these zones and the effects of injury and rehabilitation. 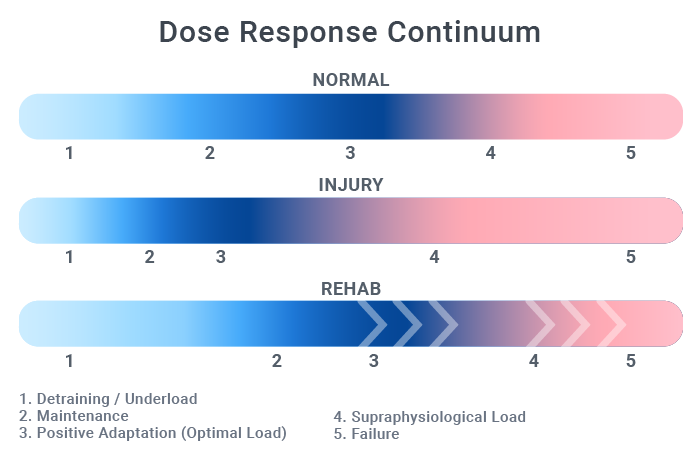 Optimal load is the dosage that maximizes the tissue’s physiological adaptation.5 By definition, optimal load also falls within the envelope of function. In their excellent paper, Glasgow et al. state that “for loading to be optimal, it should be directed to the appropriate tissues and gradually progressed in terms of magnitude, direction and rate.”5

Thus, the initial goal of the clinician is to establish the envelope of function to ensure loading drives adaptation in the desired direction. Negative adaptations come from both too much and too little load. In fact, under loading has been declared one of the top 5 issues in physical therapy by the APTA as part of the Choosing Wisely® campaign.

Within the envelope of function, clinician must determine the optimal load to expand the envelope of function so it ultimately encompasses the patient’s desired level of activity. This load reflects the individual’s current state of fitness and readiness and will therefore change based on many factors, including adaptation to previous loads. This is why progressive overload is so fundamental to exercise prescription. Because of all the variables in play, the term “sloptimal” dose may be more appropriate.10This term respects that there is some wiggle room between the upper and lower limits of appropriate dosage.

Tissue responds to stress with a constant dance between the yin and yang of tissue homeostasis. In fact, allostasis or homeodynamics may be more accurate terms than homeostasis.11,12 Both of the terms challenge the concept of a steady state internal environment and replace it with the idea of multiple layers of redundancy that are constantly changing to maintain an optimal level of readiness for the current demands. The difference here is subtle but profound. Homeostasis implies a steady state whereas allostasis can be viewed as a response that not only reflects but also anticipates the demands of the environment.11 Indeed, physiological adaptations are a result of multiple dynamic control networks, rife with feedback loops and other regulatory mechanisms extending from molecular to system levels.12 Instead of a stable system where change occurs only to restore balance, it may be better to envision a constantly changing system that reflects and anticipates the environment.

Because of this dynamic nature of adaptation, a static approach to exercise dosage falls short. This is where Bayesian reasoning can be used to good effect. This approach assigns a probability based on a best guess to some theory, which is later revised based on any additional evidence that emerges. In a very general sense, when a clinician approaches a clinical question, prior information can be known (e.g. general healing time frames) and unknown (e.g. the optimal load for this patient), presenting the clinician with uncertainty.13 To make the right decision, the clinician must quantify this uncertainty, i.e. by assigning a probability to it. This probability is based on any known information and the best guess regarding the unknown. Then, the clinician applies an intervention, reviews the results, and updates the prior probability to reflect the new evidence. The level of confidence assigned to the original probability and the implications of the new data will influence the significance of this change.

What does this mean to a clinician? The application of load must be informed by prior plausibility, modified by feedback, and updated to reflect a current best approach to loading that fits within the patient’s envelope of function. As Goldilocks would say: it must be “just right.”

Let’s assume a patient presents with suspected patellar tendinopathy brought on by a recent increase in pickup basketball games.

At this point, the clinician may decide to begin loading via isometrics to initiate positive local adaptations as soon as possible while also taking advantage of the analgesic effect.

To avoid driving a loss of adaptation by under dosage, the clinician may also decide to cut the weekly game time in half with self-removal during games if subjective pain reaches a mutually agreed point. This would be the estimated optimal load within the most probable envelope of function.

At the next follow-up, the clinician will assess the patient’s response and modify the load to reflect the outcome. In our example, there is a chance that the pain slightly increased. The probability that loading is necessary remains very high (due to solid supporting evidence), but the individual’s optimal load was missed and so the dosage should be adjusted for a more favorable response.

Get the Dosage “Just Right”

When implementing a systematic approach as described above, the clinician can minimize wasted time and ensure that variations in patient response are rapidly reflected in their treatment approach. Much like Goldilocks in the fairy tale, the clinician should ensure that dosage within a zone that is “just right” when tissue adaptations are the clinical goal.